As I sit here, I’m watching my Tour Divide record, which I set in 2012, get broken. Not just broken, but smashed, pulverized, crushed. Ms Lael is running almost a full 24 hours ahead of my record pace right now in southern Colorado, after having only pulled away from my ghost pink dot nearing the end of Wyoming. And I’m not surprised. I said at the beginning of the race, that given good luck and good weather, she’d go sub-18 days compared to my 19 hours 3 hours.

I figured that because given what I knew of my record run (snowy passes for the first 4 days, a strained achilles from hiking through snow, a bruised thumb tendon from pushing my bike with aerobars through snow leading to an inability to shift with my right hand, and a cut on my foot that was leaking pus to the point that I probably should have had checked out) and my dawdling through towns, especially the second half of the course where I felt pretty comfortable with my lead and with my chances of going under the current 25 day record, that I could have gone pretty close to 18 days.

And I knew that Lael was stronger. I’d gotten to ride with her when they came down to Tucson for her to run the Tucson marathon. I was impressed by that whole visit.

Then (based entirely what I’ve read off of Nicholas’ blog), she came down with a cold and could barely breathe through Montana, very similar symptoms to Mike Hall’s amazing run in 2013 that was thwarted by wild fires in NM. My ghost and her pink dot paralleled each other nearly identically…except for town stops. She was in and out in at least half the time, slowly making up the extra time that she’d spent sleeping the first few nights. 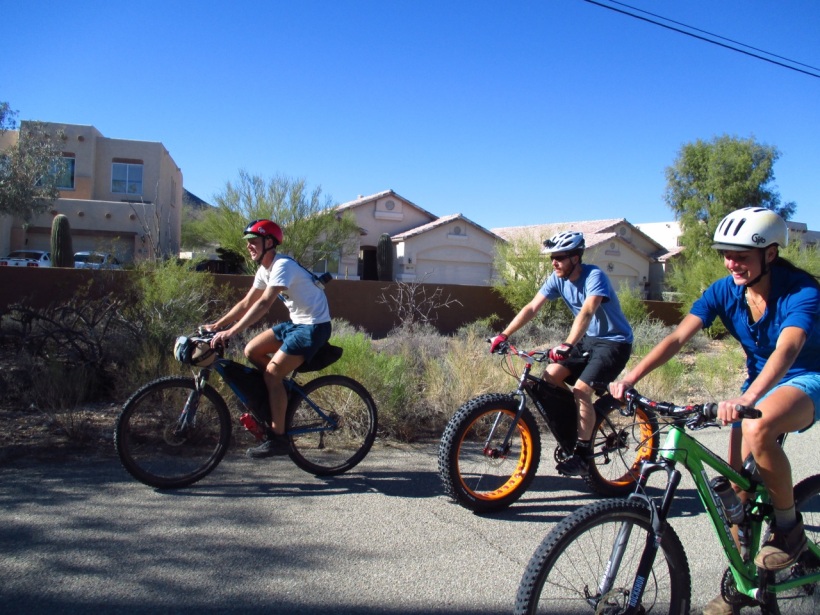 And then she took off. Flying on the trail. Flying through towns. And I am so beyond stoked for her.

I always knew that the record would fall sooner rather than later. When I finished the ride in 2012, the first thing I said to Lynda, who was my coach at the time, was, ‘That was a good first run through. Next time I race for real.’

Of course, the second run through never came for me (and probably won’t in the future), so I knew it was just a matter of time until someone would come to trim the fat off of my time.

I really wanted the record to stay in the dirtbag bikepacker family. I really wanted a bad-ass women who wasn’t afraid to do crazy stuff (like ride her bike from her home in Anchorage to the start in Banff) to put down an amazing ride on the route.

I love the fact that while I spent the year training and preparing for the Divide, she decided to do it while touring around in Israel this spring, and that was after she and Nicholas had toured around in South Africa for the winter.

I love the fact that she rode a 1,900 mile prologue before spending a week in Banff recovering and then racing. People who pull stupid shit like that, and pull it off, go straight to the top of my bad-asses list.

She clearly knows how to live off of the bike without the creature comforts that we’re all conditioned to believe we need. I thought I needed one ‘real’ meal per day, for example. Other people think they need hotel rooms. Living on a fairly minimal budget and touring half the year, I’m sure she and Nicholas have turned the art of eating from grocery stores/gas stations while riding into an art.

Pretty sure she never stops smiling.

And she’s on a mission. More than anything else, she’s poking gaping holes into where I got lazy on the route.

The records are coming down because people are being more focused. They’re having more moving hours on the bike, less futzing, and faster moving speeds.

For a little bit there, I was beating myself up about wasting time on the route while watching my pink ghost…giving myself a hard time about choices that I made 3 years ago. But you know what? I wouldn’t trade the three hours I spent in Salida talking with friends at Absolute or seeing Kep and his kids, or the two hours I spent in Pie Town eating and talking to Eddie Clark, or the whiskey that I drank with Matthew Lee at Brush Mountain Lodge, or the countless other little time-wasters that made me smile for a faster time. No way.

When I finished that ride, I was pretty proud of what I’d accomplished. Sure, I’d screwed up some things pretty majorly and even more things minorly, and I knew it, but I was stoked at the experiences that I’d had out there. And I felt that I’d set a pretty good, but not impossible bar, for girls to aim at.

I hope that regardless of whether Lael’s time (assuming she holds it together for the last 1,000 miles) lasts as a record for one year or ten, she had/is having an amazing time.

Something tells me she’s smiling her way through southern Colorado as I type this.